I hadn’t planned on contributing anything to the Very Brady Birthday other than the cake, but as I wandered the party supply aisles at Target in search of 70’s-ish wrapping paper, my eyes drifted up to a row of piñatas. None of them had anything to do with the Brady’s, or the 70’s, but I was reminded how much I like piñata-bashing as a party activity: good way to give out treats without having to do favor bags; everyone can participate, yet it’s equally fun to watch other people take their turn; and it all culminates with a loud noise, a big mess, and lots of candy. For about the next half-hour a part of my mind continually sifted through Brady piñata ideas – something simple enough to be formed with a rubber balloon, yet immediately referential to a timeless Brady moment, and preferably something that was supposed to get broken. (Oddly, not until now did it occur to me to make a Marcia-ñata with a bulls-eye on her nose. Perhaps that’s out of loyalty to my own "Marcia".)

Anyway, it wasn’t long before I knew I had the perfect Brady-ñata concept. When we got back from Target, I grabbed my Brady dvd’s and searched out Confessions, Confessions, truly a classic episode from Season 2. 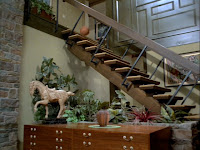 Here’s a synopsis from The Canonical Brady Bunch Episode Guide:

The other children each confess to breaking Carol's favorite vase ("Mom always says, 'don't play ball in the house.'")* in order to prevent Peter from getting grounded and missing a camping trip. The parents put Peter in charge of doling out punishments to the others.

* [easily the most frequently misquoted line in Brady history]
I was disappointed to see that the vase I would be replicating was uglier than I remembered – brown and orange, with a weird fish-scale texture around the sides and inverted scallop shells around the top. 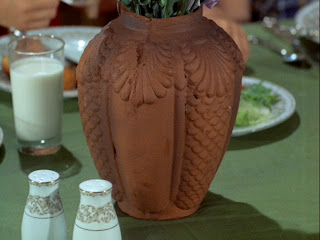 I gave myself a bit of artistic license, though, rejecting the matte, dark orange paint in favor of a lovely pearlescent copper – close enough to the original, but prettier. (After all, we’re talking about a girl’s birthday party, not a reenactment of the actual episode.) I bought the same pearlescent paint in peach and brown for accent painting. No real idea why I went for tempera rather than acrylic paint, which is what I usually use. I guess I thought it might dry faster, and it comes in larger bottles. Plus, the colors were so nice.

And this is where a little insanity, or the Christie Factor, set in. Piñatas are of course made to be broken, and therefore very little time and effort should go into making them. But I couldn’t stop myself from quickly checking the soap- and candle-making aisles to see if just maybe I could find a scallop-shell mold to add some dimension, and authenticity, to the vase. Now, anyone who’s ever shopped at Pearl Paint in Cambridge can tell you that the store is perpetually understocked. Odds are that had I gone to the store on another day with the explicit intention of making a shell-shaped bar of soap, I would have left in frustrated defeat. Yet on this day, uncertain as to whether getting into dimensional papier-mâché was really the best idea, there it was: on an aisle pretty much depleted of all other soap-making equipment, a lone clamshell soap mold more-or-less the perfect shape and size for my piñata. 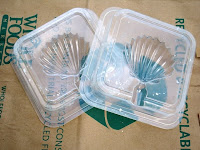 Now all I needed was newspaper – grabbed a few free Metros out of the box – and a rubber balloon. Here’s a tip: For some reason (choking hazard?) it’s become impossible, at least around here, to buy packages of rubber balloons at normal places like drug and craft stores. If, like me, you don’t have easy access to a Party City-type place, try going to a florist. The nice lady at Central Square Florist sold me four rubber balloons, uninflated, for about a dollar. I went home happy and ready to get started.

I didn’t think to take pictures of the early stages of the piñata but I’m sure you can get the idea – I blew the balloon up to about 18” high and taped a strip of thin cardboard around each end to make a base and a rim. Since I was babysitting that night, "Marcia" got to help me with the first coat of papier-mâché on the body of the vase. The glue – one part flour to two parts water – is kind of gross and oddly icky smelling for something so basic, but it does the job and is satisfyingly cheap and simple to make. We covered the entire balloon with newsprint, lapping over the strips of cardboard to make them one with the vase. I had considered leaving the top of the vase – inside the larger rim of cardboard – open, but Marcia wisely advised me to cover that as well, so that it bulged over the rim of the base.

I figured I needed eight of the shells to go around the top, so I got started molding those as soon as possible. The mold had two pieces, which let me do two shells at a time, laying strips of soggy newsprint across the mold and pressing it down into the ridges as best I could, leaving plenty of excess newsprint around the edges for attaching to the vase. I only did one layer of newsprint for the shells, since they were just for decorative purposes, but I ended up with three layers on the balloon. Before I did the third layer I spaced the (completely dry) shells around the top, loosely taping them in place before attaching them with the final layer of papier-mâché.

When the third layer was completely dry, I popped the balloon – actually a pinprick didn’t do the trick; I had to cut off a chunk of it with scissors to get it to deflate. Marcia’s idea of papier-mâché-ing over the top worked perfectly; with the balloon deflated I was able to punch the convex top of the vase down so that it made a concave well inside the rim, giving the appearance of it’s being open at the top. 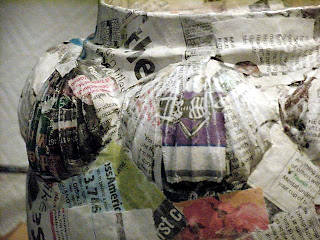 At this point the vase already looked pretty cool. One of the neat things about papier-mâché is the curious juxtaposition of random swatches of newspaper that you get. I found myself, as I applied the layers of papier-mâché, picking the more “interesting” side of each strip of newsprint to face up. Sudoku or crosswords won out over large patches of color; large patches of color or photos won out over boring text. Since I happened to have grabbed the Pride Week parade issue of the Metro, you can imagine there were some interesting photos. 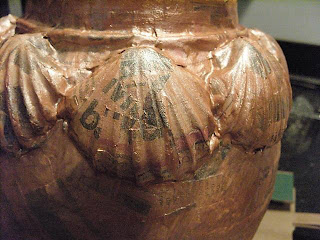 So it was sad to have to cover it up; but, knowing that nine-year-old girls were less likely than I to appreciate the artistic merits of newsprint, I started slathering on the beautiful pearlescent copper paint. Which is when I began to wish I’d thought to grab a bottle of gesso at the art store. One layer of paint later, the fine journalism of the Metro was as legible as ever. Again, the overall effect was quite nice in an artsy way, but again, I anticipated young voices inquiring “Why can you still see the newspaper underneath?”
So I persevered, adding another layer of paint before bed, another before leaving for work the next day. In all I did four coats, although there were places where it could have used a fifth.
The detail painting went pretty quickly – largely because it was now a week since this project began and mere hours before the party. I didn’t find much use for the peach paint but mainly used the brown – picking up a little paint on the tip of an angled brush and a little water on the other side so I got a “floated” effect. I did some quick shading around the shells, then made the ribs with a couple of shaded edges (very sloppy) extending down between the shells to the base. After this had dried, I added a very quick fish-scale design in every other panel around the vase. 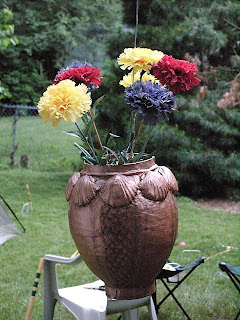 I cut a flap in the concave top, dropped in alternating layers of crepe paper, candy, and party crackers (leftover from Christmas but in non-holiday-specific jewel tones), and closed it back up with masking tape, painting over the tape to blend with the vase. (Given more time, I would’ve done this last step with papier-mâché.) Then because I was worried it would be too boring and vase-y and generally non-thrilling to nine-year-old girls, I punched holes in the top and threaded bright silk flowers down through the candy.

I had gotten so used to thinking of the vase as a work of art (however temporal) that I had forgotten to worry how well it would function as a piñata – until we got it strung up outside and a blindfolded Marcia took the first whack. It actually did great. With each whack of the plastic baseball bat (girls these days are surprisingly powerful), the piñata gave a little more, gradually leaking out its treats just as Carol’s favorite vase slowly sprung leaks at the dinner table, but holding out the big bust until each of the five contenders got at least one try.

Like the vase, the piñata was ultimately smashed beyond repair, but this time no one got grounded. Here’s the aftermath: 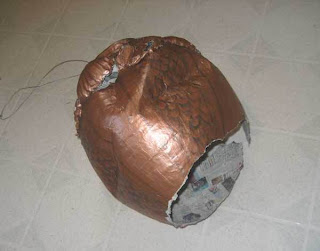 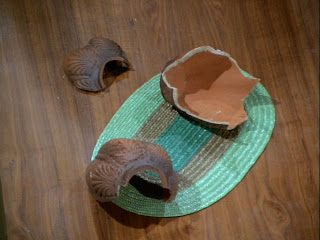 Lesson Learned (too late, this time): Always have a bottle of gesso handy.
Posted by Christie at 6:59 PM