Say Goodbye to Summer with This Simple Summery Pie

Yes, some kids have been in school for a month already. Yes, I've been wearing a jacket to work for the past week. Yes, the sun is gone by the time I get home at night. But the official first day of fall is still a few days away, believe it or not.

It might not be beach weather anymore, but you still have time to whip up a delicious, summery pie before those turning leaves turn you to thoughts of apple, pumpkin, and pecans.
I got this recipe from Mom (actually her entry in an old Union County Cookbook), and it's almost too simple to be believed. Here's what you will need: 3 egg yolks, one can of sweetened condensed milk, and 1/2 cup key lime juice, plus a graham cracker crust and whipped cream. Now maybe this makes me lazy, but I think any ingredient list that I can count on ONE HAND should win some sort of award. 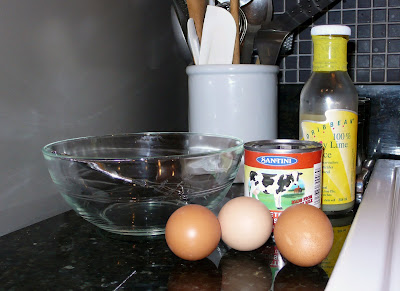 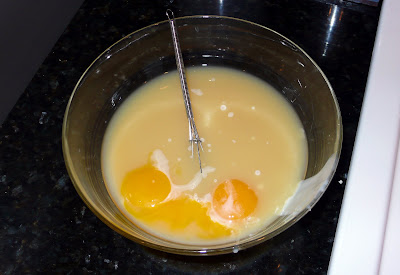 And the directions are just as simple: beat the yolks, stir in the sweetened condensed milk and lime juice, and pour into the crust. Bake for 10 minutes at 350 degrees, cool, and refrigerate for a couple of hours. Serve with whipped cream. The result is a smooth, tart, summery burst of flavor. I was inspired to make this pie for the first time a couple weeks ago. Because my local grocery is Whole Foods, I wasn't able to buy a prepared crust, so I pulled out the iphone and quickly found a simple recipe for that as well: 1 1/2 cups crushed graham crackers, 6 tablespoons melted butter, and 1/4 cup sugar. Mix these together and press into a pie plate, then bake 8 to 10 minutes in a 350 degree oven.
Making your own crust adds a nice homey texture to the pie and only adds about 15 minutes to the process. (Always assuming you're working with cooperative grahams; my first attempt involved some frighteningly resilient ones - considering how hard they were to break with a mallet, I don't want to know what they'd do to teeth.)
pre-baked crust, ready for filling 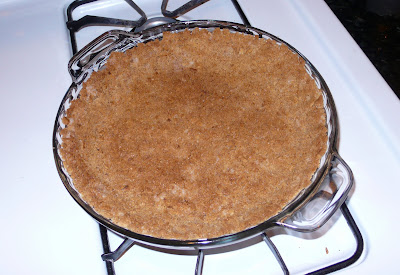 I baked my first pie conventionally - that is, in a conventional oven - but for pie #2 (about a week later - what else are you supposed to do with the rest of that lime juice?) I decided to test out our fabulous countertop oven. Originally I bought the oven for heating up party foods, which it does quite well, but this was my first attempt at using it as a real "oven" oven. The pie came out perfectly - not noticeably different from the first one - and without having to heat up the house by turning on the big oven. Too bad I learned this trick so late into the summer - would've saved some AC bills. Stay tuned for additional tests of the Delonghi oven... 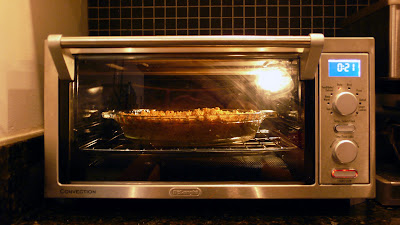 Postscript: To me there is no greater testament to the simplicity of this pie than that, after reading a boastful email from me about pie #1, my friend Russ - admittedly talented at many things but not exactly known as a baker - was inspired to go home and make one of his own, and had made yet another one within a week (again, the leftover lime juice...). If you like lime-y-ness, and you like pie, there's no excuse not to try this yourself.
Posted by Christie at 8:30 PM