It’s a seminal moment in life when one’s formative years resurface as pop culture nostalgia…. Wait a second. We’re reminiscing about the 90’s already? My copy of Jagged Little Pill isn’t even dusty!

But having your teenage years serve as fodder for VH1 is nothing compared to watching them turned into American history for the preteen-and-under set. For my sister, this milestone came last fall when her younger daughter saved up and bought herself the newest “historic” American Girl doll: Julie, a young girl growing up during the bygone days of the 1970’s. Leave it to the folks at Mattel to unearth rainbow patches and Jiffy Pop as essential artifacts of American history. In fairness, I can see that our nation is young enough that you quickly run out of relevant eras to commemorate – it may not be too long before they introduce “Madison, Girl of the New Millenium” complete with iPhone, Crocs – er, sorry, Rainbows – and Jonas Brothers cd.

At any rate, my Mom had a lot of fun whipping up a bunch of clothes to augment Julie’s peasant-blouse-and-bellbottoms wardrobe: tie-dye top, loud print dresses, and cranberry velvet ensemble worthy of Laurie Partridge, to name just a few. Another project she had in mind but didn’t get done in time for Christmas was a metal lunchbox similar to the accessory set you can buy from American Girl . We tried to get this done in time for Christmas, but as often happens that time of year, other things took priority. I ended up taking it home with me, promising to send it to my niece (“Julie”?) ASAP, and giving her full permission to nag me until I delivered. (A crucial measure given my notoriously poor performance in actually finishing projects such as this.)

In fact poor “Julie” (and Julie) didn’t get her lunchbox until this summer – many stupid things factoring into the delay – but I believe she was pleased with the results.

Although I’ve tried my hand at many things, I am certainly no metalworker. Thus, to make this box I of course needed to find a small-sized metal lunchbox to cover. Often you can find these filled with candy at Target-like places, especially around Christmastime, but we had trouble this (last) year. In the end we found the perfect size mini-lunchbox, not in a store, but in one of my sisters’ minivans: a used but perfectly acceptable specimen about 4” x 2 5/8”, with the Tootsie Pop logo on both sides and around the edge.

Julie’s lunchbox features a 70’s-ish flower graphic – cute, but to me, not as uniquely true to the era. In my memory at least (and admittedly, my lunchbox-carrying days were in the 80’s, not the 70’s) lunchboxes were all about branding: TV shows, movies, and toys. My sister had Annie, I still have my old Dark Crystal, and one of us had Strawberry Shortcake at some point. I remember people with the Dukes of Hazzard, Cabbage Patch Kids, GI Joe, etc.. No doubt many would have gone straight for Scooby Doo to evoke the 70’s, but for our family the quintessential TV brand of the era will always be The Brady Bunch.

Now as it happens I have a bit of experience in the area of recovering metal lunchboxes. Several years back, in the spirit of many things Christopher Guest , I gave my brother a Mitch&Mickey full-size lunchbox that has never to my knowledge carried a peanut butter sandwich but has intrigued one or two people over the years it’s sat in his office. For the Mitch&Mickey box I just formatted scanned images into two rectangles the size of each face of the box, printed them onto sticky-back paper, trimmed, and attached. I made smaller “stickers” to cover odd existing designs along the box edges, then gave the whole thing a couple coats of clear acrylic spray to both protect and add a nice sheen. (This final step is a bit dicey if you’re using an inkjet printer, as the ink can run if you’re not careful.)

The process for the Brady Box was essentially the same, although I had a bit of trouble at first finding high-resolution Brady images online, particularly the classic blue nine-square grid which I had envisioned as one face of the box. In the end I found a few helpful sites, the best of these probably being the Brady Bunch Shrine, and also scanned some of the images from the episode guide that accompanies The Brady Bunch – The Complete Series which I just happen to have on dvd. Then I just messed around with the images in Photoshop and InDesign, formatting them to the dimensions of the box.

Whereas for Mitch&Mickey I could use smaller stickers to cover the edges of the lunchbox, the scale of the Brady Box was too tiny for that. I opted instead to completely paint over the edges of the Tootsie Pop box with enamel paint (like you use for model cars). The stuff’s a bit of a pain to use – very goopy – and careful as I was it was virtually impossible to avoid getting it where you didn’t want it, but two coats of the stuff did a good job of covering the Tootsie graphics. As with Mitch&Mickey, I gave the whole thing several spray coats of clear acrylic protection. 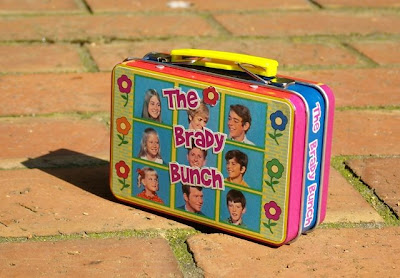 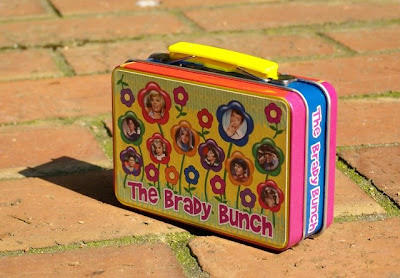 For a fun touch, I took a few additional Brady images I’d found online and made them into magnets using inkjet magnet paper (very fun stuff) to decorate the inside. 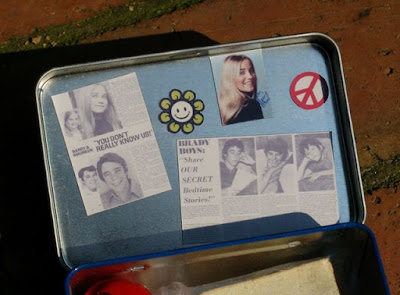 Julie’s official lunchbox comes complete with an actual (albeit inedible) lunch, including sandwich, chips, thermos, and Hostess-style cupcake. Although I’ve made my fair share of FIMO/Sculpey items in the past, for this project I opted for a more basic, and in many ways easier modeling option for the food: salt dough.

I have a great fondness for this medium. High on my roster of happiest memories are the nights we would pull out our homemade salt dough ornaments each Christmas along with our salt dough Nativity set. (My own contributions to both of these were minimal and somewhat embarrassing; I was probably about 5 when we made them.)

Salt dough is a very easy-to-make and easy-to-use dough that you typically mold, bake, and paint. (I suppose you could tint it into individual colors if you wanted.) Anyway, salt dough really deserves its own post, but here are the basics: 2 parts flour to 1 part salt to ½ part water (approximately – actually, start with that much water but be prepared to add half as much again). This forms a Play-Doh like dough that’s easier to mold than Sculpey and of course far cheaper. If you want, you can add wallpaper paste for elasticity (I don’t do this) or a little oil to make it less sticky. Because of the salt, the finished texture is a bit courser than Sculpey, but the results are pretty satisfactory. In fact, for food (especially bread) the texture is almost desirable. After molding, set your items on a cookie sheet and bake for several hours at a very low temp (about as low as you can set the oven) until hard.

My salt-dough apple attempts kept cracking (possibly adding the wallpaper paste would’ve fixed that), but I eventually got something satisfactory. I made the sandwich in separate components – lettuce, cheese, ham, bread – so they would be easier to paint, and ultimately assembled it with GOOP glue (you want something goopy to make up for unevenness). I even lucked into finding a tiny ziploc bag the perfect size to hold Julie's ham sandwich. (Wikipedia says Ziploc bags were originally test marketed in 1968, so nothing anachronistic here.)

My cupcake was the most fun; it felt like cheating to just paint the swirly icing on, so I formed my own, carefully, with the salt dough, and glued it onto the cupcake after painting. I used craft acrylic paint for everything and, as with the lunchbox, gave everything a good coat of clear acrylic to protect it. 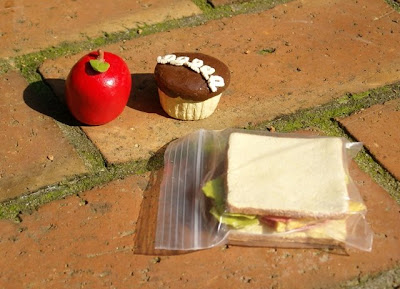 Julie’s lunchbox comes with a cute little thermos, but I had no luck finding anything good to convert into a mini thermos. Chapsticks are too tall and thin, medicine bottles, even small ones, are too big and often have raised writing on the caps. The only other good options are made from glass, which seems inappropriate for what after all is supposed to be a toy. In the end my food took up so much space inside the lunchbox there wasn’t room for a thermos anyway, so I decided that “Julie”’s Julie probably buys milk from the cafeteria. 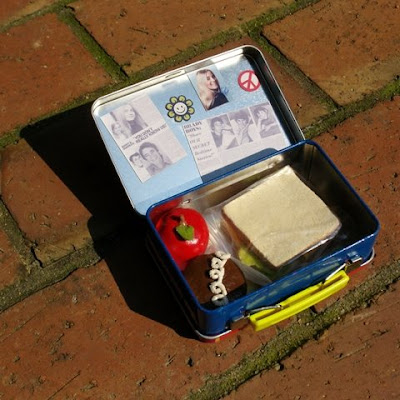 Assuming they even had pasteurized milk way back in the 1970’s...
Posted by Christie at 7:49 PM

Just stumbled across your blog. How cool is that Brady Bunch project! Love it! I'm a salt dough fan myself. Great job!

Actually, Christie, getting the lunchbox in the summer inspired your niece to get out Julie and Ivy (Julie's Asian-American friend, acquired as a birthday gift) again. Said niece is at that tweensy age when her mom is thrilled to see her playing with dolls. I have to say, I felt guilty reading about the model paint; that part sounds unpleasant. Your niece's favorite part of the lunchbox was the magnets, some of which contained fanzine info about Maureen and Barry. Sandi

Thanks, Amanda! Your blog is amazing. Carrie and I will get there someday, maybe. I have a few other salt dough projects in mind, but might not get to them until closer to Christmas.

Actually, Sandi, the worst part about the model paint was that I painted the edges while watching the Superbowl. It's true that I was too upset to eat that night, but it didn't have anything to do with the paint, trust me. In the interest of saving "Julie"'s eyesight, though, why don't I send you the full-size images I used for the magnets.