Well, there's been much about which to post, but little time in which to do it lately. Let's start with something relatively easy.
A few weeks ago, the remarkable Bakerella astounded me once again with yet another beautifully-photographed, unbearably-cute new take on the cupcake. 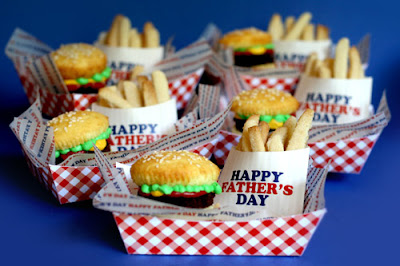 (If you didn't follow the link, here's a quick rundown: yellow cupcakes split in half for the "buns", brownies cut into circles for the "patties", and skinny sugar cookies sprinkled with sugar for the "fries".) Incredible, yes? I mean, the cupcakeburger on its own is cute, but pair it with sugar-cookie fries and put it in a handmade paper tray, and it becomes irresistable. Literally irresistable - as in, I was still in remission from my last insane cake-decorating project (post to follow), but still couldn't keep myself from making these for our little 4th of July party.
Here's the result: 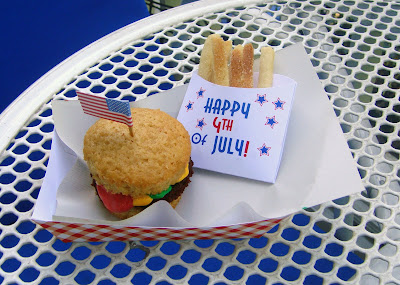 I'll readily admit this isn't nearly as perfectly-cute as Bakerella's version, but they (I made 8) were cute enough to bring smiles to my nieces' faces which, after all, was the object all along. Depending on how you define "easy", this is a pretty easy project - not too messy, not too technically demanding. The issue isn't ease, however; it's time. Because cute as they are, these cupcakeburgers are a complete, time-consuming pain to make. Consider the steps involved:
1) Make the cupcakes.
2) Make the chocolate cake (or brownies).
3) Make the cookies.
4) Print the little trays.
5) Cut out the little trays.
6) Assemble the little trays.
7) Design the stupid little french fry holders.
8) Print the stupid little french fry holders.
9) Cut out the stupid little french fry holders.
10) Assemble the stupid little french fry holders.
11) Tint 3 colors of frosting.
12) AND, assemble everything (which of course includes splitting the cupcakes, cutting out chocolate cake-rounds, etc.).
Hey! It's a 12-step process!
Anyway, at least that 12th step is pretty gratifying, as you're left with amazingly cute & sugary little fast-food meals.
I chose to make my life slightly more difficult (but make the project more rewarding) by making everything - cupcakes, chocolate cake, cookies - vegan so that my little 4-y-o niece could for once fully participate in the fun dessert. Not that at 4 my niece is already making life-choices about her eating habits. She's just still (hopefully) growing out of several food allergies that prevent her from having any dairy or egg products. Meat, she's OK with, but unfortunately most cupcake recipes don't involve ground beef (not even for cupcakeburgers!), so it's hard to take advantage of this.
Fortunately - both for my niece and in this case for myself - the world we live in is fairly replete with nondairy options. For the "patties" I made what has become one of my niece's dessert stand-bys: Crazy Cake, a quick-and-easy chocolate cake recipe with none of the offending allergens:
Crazy Cake*
Mix together:
1 1/2 cups flour
1 cup sugar
1 tsp. salt
1 tsp. baking soda
3 Tab. cocoa powder
Add:
2 tsp. white vinegar
1 tsp. vanilla
5 Tab. oil
1 cup cold water
Mix well and pour into greased pan (8" or 9" - or whatever works for what you're doing).
Bake at 350 degrees for 25 to 30 minutes.
I made this in a 9x13 baking pan so it wouldn't come out too thick and, when it had cooled, inverted it onto a cutting board and used one of my nifty Ateco circle cutters to make my cupcakeburger patties. (Helpful tip: Don't forget to grease the pan. I somehow neglected to do this the first time around and had to scrape the entire cake into the garbage and start over. Argh.) I ended up splitting each "patty" to make it thinner - otherwise they were too thick relative to the "buns".
For the "buns" I used a Cherrybrook Kitchen yellow cake mix that I picked up at Whole Foods. The cupcakes came out more like muffins than cupcakes in my opinion - both in appearance and in sweetness - but that's a minor issue, I guess. I tinted a Pillsbury vanilla frosting - which contains no dairy products (though you should always read the label just in case) - for my ketchup, mustard, and lettuce (along with a LOT of red food coloring for the ketchup). And finally, I googled "vegan sugar cookies" and came up with a plethora of recipe options for my "fries". (I went with this one because it only involved one obscure ingredient - vegan maragine - whereas others also involved tofu or soymilk or somesuch. (OK, I guess they all also involve egg replacer, but I have that on-hand anyway, so I don't consider it obscure.))
Bakerella very kindly posted a pdf with templates for the tray, french fry holder, and liner paper. (I skipped the personalized liner paper since I was unable to find vellum.) Of course, her little faux fast food meal was made in honor of Father's Day, whereas mine was for Independence Day. Thus, I did a quickie 4th of July design on the blank french fry holder template that she helpfully provides.
Finally, I couldn't resist putting little American flag toothpicks into the burgers. Since I had none of these on hand, and couldn't think of a nearby store that was likely to sell them, I did a Google image search for the US flag, scaled it to about 3/4" high, made a horizontally-flipped version of it, and printed as many would fit on a sheet of 8 1/2"x11" paper - cut them out with an Olfa knife and used double-sided tape to wrap them around plain toothpicks. The extra step of making the flag-picks sounds like a pain, but it went pretty quickly (in comparison to, say, making the food trays) and added a really cute touch.
And there you have it - Fourth of July Burgers and Freedom Fries for the sweet-tooths (sweet-teeth?) among us. Don't worry, Father's Day and Independence Day may be behind us, but it's not too late to make these for Labor Day or any other summer get-togethers you have coming up. Just be prepared to spend some time, or find a helper to make all the paper products!
Oh, and, belatedly... 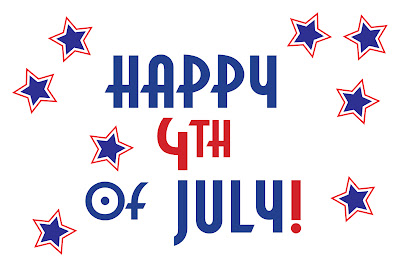 *My recipe, copied from the original in my Mom's cookbook which was given to her by a former neighbor, spells it "Crazy Kake". OK then, but why not go ahead and make it "Krazy Kake" and at least be consistent? Though that reminds me of the old "Kleen Kar" carwash next to my old elementary school, which even as a first grader used to drive me crazy. (Or did it drive me krazy?)
Posted by Christie at 3:47 PM