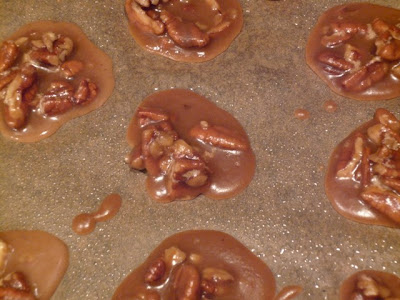 Well, Mardi Gras is just a couple days away. I've never been to the various parades and festivities in New Orleans myself, but my Mom being from New Orleans, I grew up playing with boxes of Mardi Gras beads and dubloons. It's probably just as well that my family stopped going down for the parades before I was born, or I could have ended up in a picture like this, but at any rate, an appreciation for this particular holiday has always stuck with me. 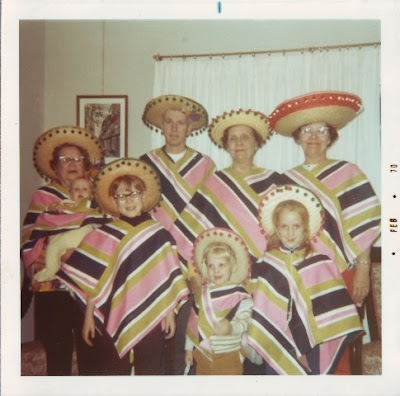 When my old roomie Julie and I moved to the Northeast many years back, we were shocked and dismayed to discover that no local bars or restaurants seemed to acknowledge the event. So we began hosting our own mini-Mardi Gras, festooning our dumpy little apartment in purple, green, and gold, and serving up Central Grocery-style muffalettas, crab dip, King Cake, and other Southern delicacies to mildly bewildered coworkers. We got more creative as we went along, at our apex serving up color-coordinated pre-mixed cocktails (margaritas for gold, "leapin' lizards" for green, and I believe hurricanes for purple).
Without an equally-enthused cohost these days, and with considerably less energy myself, I can't say I'm up to all the effort of putting on a whole party, but I like to continue the festivities on a smaller scale. This recipe is from my Mom, and I think it's a safe assumption that she got it from her mom - above, far right - or from her wonderful aunts - above, far left and second (adult) from right. Praline recipes vary considerably - some are hard, some are sticky. These are the kind I grew up with and are therefore just right as far as I'm concerned. I love to break off a piece and let it slowly disintegrate on my tongue into sweet, buttery goodness. They're heavenly, and they bring back fabulous memories, if not of New Orleans, then certainly of our old house in Arkansas.
The best thing about this recipe is how little time it takes, start to finish. Mom used to go into the kitchen and emerge 10 minutes later with a fresh plate of pralines. And when they were gone, she would (sometimes) pop back in and make another batch just as quickly.
The second best thing about this recipe is how basic the ingredients are. If you have a reasonably well-stocked kitchen, you can probably make them right now. Probably at most all you need to go buy is some pecans.
Before we proceed, however, it is vitally important that you know exactly what you're making - which is to say, that you know how to pronounce it. Repeat after me: "PRAH - LEENS". Can you say that? Very good. Make sure, too, to get the accent on the second syllable. You may have heard others refer to a Southern candy called "PRAY - LEENS." I have no idea what this could possibly be, but it sounds dreadful to me. Alright? All set to make some prahleens? Let's get going.
To make approximately 16 pralines, you will need:
1 cup sugar
1/2 cup brown sugar, packed
1/4 cup milk
1 T. butter
1 cup pecan pieces
1 tsp. vanilla I like the pecan pieces to be fairly large - I break them by hand into the measuring cup, breaking each pecan half once at most, and leaving a few unbroken. 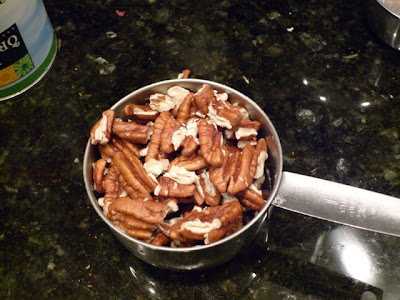 Combine sugars, milk, butter, and pecans in a heavy saucepan.

Bring to a boil.

Beat to a cream, about 3 minutes.

Drop in spoonfulls onto greased wax paper and allow to cool.

Once the process gets going, it moves quickly, so it's important to prepare your wax (or parchment) paper before you start cooking. For a candy recipe this is pretty simple (no exact temperature requirements); however, it's important to time things exactly according to the directions. For me this means resisting the urge to start tidying up while the candy is boiling. 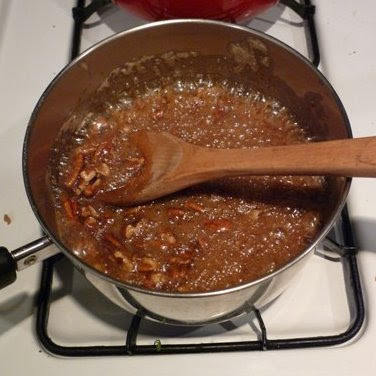 As you beat the mixture to a cream, you'll notice - probably after about 2 minutes - that it will start to thicken up quite quickly. The exact moment at which to stop beating and begin dropping is difficult to describe, but in general it's better to guess a bit early (when it still seems runny) than late (when you could end up with one giant praline stuck to the inside of your pan). The best thing to do is to test-drop when it starts to thicken and see whether the candy runs all over the counter or whether it sets up.

The longer the mixture stays in the pan, the more rough & sugary the consistency will be. This means the final pralines you drop may not be the prettiest. I like to drop the last dregs in small, coin-size pieces in between the larger pralines. These make great "tester" pieces for the cook or other "helpers" who happen to be standing by. 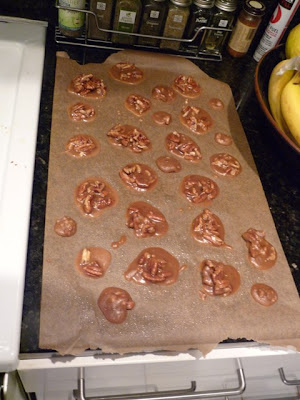 If you end up waiting too long to start dropping and the mixture is un-droppable, no worries. Run some water in the pan, wash it out, and start again. Chances are you have enough ingredients to make another batch, right?
Finally, I can't resist telling my personal Praline Disaster Story. Everything was going smoothly; I timed the candy boiling perfectly, and added my teaspoon of vanilla just as I was supposed to. Except, at this point I noticed that the candy suddenly had a less buttery-sugary smell and more of a harsh-minty smell. What happened? As I continued to beat my mixture to a cream, I glanced down at my bottle of vanilla. Except it wasn't a bottle of vanilla. It was a bottle of peppermint extract. What else could I do but continue to beat the candy and eventually drop my weird praline mints onto the paper? Take it from me, this is was not one of those peanut butter/chocolate collision moments.
However, if you do have interest in trying some variations on the classic praline flavor, there's an old Southern Living article - no longer, alas, on their website - with several different flavor possibilities using a slightly different recipe. Some helpful person has transcribed the original article at post #15 on this page.
Posted by Christie at 4:40 PM