As noted in this space before, I come by my slight creative insanity honestly. This was clearly in evidence on my recent trip home to Georgia. One of my nephews (we’ll refer to him as “Legolas”) had just turned twelve, and my visit coincided with his party, to be attended by two friends of approximately the same age, his brothers and sister, and several of his cousins, ranging in age from two to sixteen. These kids have celebrated each other’s birthdays for years, and it’s always fun to see them have a good time together. Last year, Legolas’s parents put together an incredibly elaborate and fun Harry Potter party, which featured various activities related to Hogwarts classes, etc.; this year, he wanted a Lord of the Rings theme. (What can I say? The kid has good literary taste.) Over the course of several weeks, and making ingenious use of dollar store finds, my Mom and sister set about planning a range of activities that could see the kids through the major highlights of the saga. (My own contributions to the party were minimal [insert link], but the party as a whole is worth posting about, so due credit will be given as appropriate.) I have to say, too, that one of the things which really made this party work is the fabulously diverse nature of my parents’ lot, which provided amazingly convincing settings for many Middle Earth locales.

Before I get to the activities, I should mention that several of the party-goers were in costume: Legolas complete with pointy prosthetic ears, Aragorn, Éomer, and others in mail shirts with shields, etc., boy Hobbits in tunics (Frodo with a gold ring on a chain around his neck), girl Hobbits in cheerful vests and skirts, Éowyn in a more Rohan-esque vest, blouse, and skirt, and of course Galadriel in white gown with golden crown (crafted from a dollar store windchime). Nearly all of this was made by Mom in the days leading up to the party. 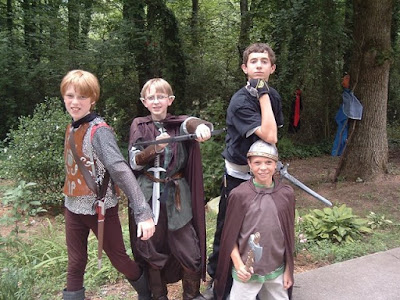 First stop for the group was The Prancing Pony, otherwise known as my parents’ back patio, where Barliman Butterber (the cleverly disguised father of the birthday boy) served the guests salty snacks with beer (that would be IBC for some, barrel-shaped HUGS for others) while local fiddlers, possibly recognizable to their party-going children as two of my violin-playing sisters, provided entertainment.
When all had had their fill, Barliman escorted the group around the side of the house to the front yard, where (possibly transformed into another character?) he instructed them on the basics of fencing, before leading them up to meet Gandalf (another brother-in-law, complete with cloak and staff) at Weathertop – conveniently located on the hill in front of the house. Here, the fencing lessons proved life-saving, as two terrifying Ringwraiths – papier-mâché masks, spray painted black, suspended on coat hangers with flowing, weblike black fabric – were awaiting them amidst the trees. Each member of the group, including the two-year-old, got a turn fighting off these fearsome baddies. 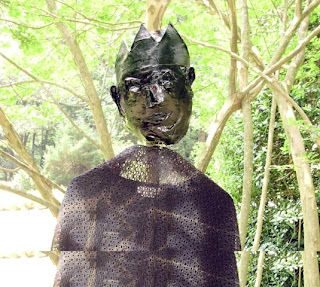 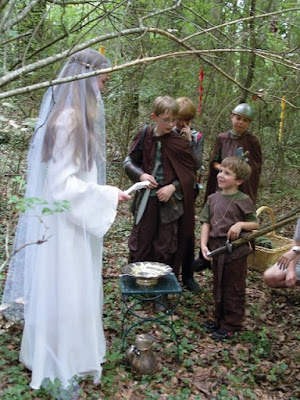 After Weathertop, the party proceeded through a creepy patch of woods, where they were ambushed by four gruesome orcs [read here about orc fabrication]. These they fought off with bows and arrows (of the suction-cup variety). Safe at last, the group continued around the other side of the house and down a steep incline to Lothlorien, the (spray-painted) golden wood. (Yeah, we skipped the Mines of Moria. This way Gandalf didn’t have to go anywhere.) Here our lovely Galadriel was put to work, presiding over her silver mirror and testing each of the other guests’ knowledge of Tolkien lore with LOTR trivia questions . Upon a correct answer (younger ones were given assistance), guests were presented with a bag of lembas, a popsicle (maybe not canon, but very appropriate considering the Georgia midsummer climate), and of course a green cloak with an attached leaf brooch (cloaks made by Mom from dollar a yard Wal-Mart fabric, with my sister and I on brooch assembly: silk leaves, stripped from their plastic veins, ironed onto a sturdy fabric backing, and highlighted with gold paint).

On around to the swingset frame, where none other than Shelob – papier-mâché piñata courtesy of Mom, with wiggly hairy legs of doubled-up pipe cleaners and eerie bulging yellow eyes – awaited the group for yet another challenge. Each guest took a blindfolded turn at defeating the horrible spider, armed only with courage and of course Sting, one of many plastic swords in my parents’ grandchildren-friendly collection.

The spider proved so formidable that our initial Sting actually broke from its hilt and had to be replaced. Mom had cleverly given Shelob a segmented body, with two separate balloon-formed cavities. The nice thing about this was there were actually two piñata-bashing victories, and two candy spillages. When at last the beast was bested, its sugary sweet insides collected by the assembly, the group proceeded inside for the final challenge.

The front hall may not look like Mordor, but there at the foot of the stairs rose the fiery Mount Doom, another of Mom’s papier-mâché creations. Each guest was given ten gold rings, and standing above the mountain, took his turn at destroying the Ring of Power (or actually, getting the highest out of ten into its opening). (The rings were a dollar-store deal: 100 for $1.) 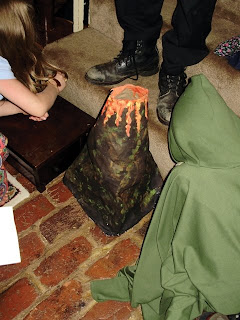 Next, all gathered round the table to celebrate by feasting on Mount Doom cakes – mini chocolate bundt cakes drizzled with fire-colored frosting and bedecked with more of the gold rings (made by Mom) – along with miniature Ents – made from pretzel rods and green-tinted chocolate (courtesy of my sister).
That's our lovely Éowyn with an Ent in hand, partially obscured Mount Doom on her plate, with Legolas besider her (note the Vulcan - er...Elvish ears). 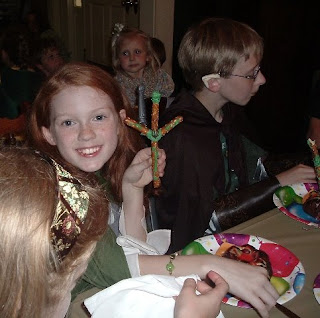 Desert plates were then whisked away and replaced by cards for a special LOTR version of Bingo (my sister’s creation), with L-O-T-R across the top of the card and various characters arranged below each letter. As characters were randomly drawn and called out (eg., “R-Treebeard”), players marked off their scorecards with precious gems (er…dollar-store green glass tiles). Adults were amused that each round of the game was won by one of the very youngest party guests, but that’s the lovely, equalizing nature of Bingo.

Finally it was time to depart Into the West – that is, about five minutes away to the home of Legolas – where presents were opened and Hobbit-hole cake (made and decorated by my sister) was served. 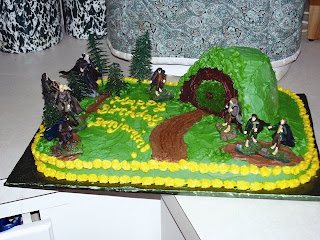 Then, exhausted with knife, sting, and a long burden (or something like that), the adults crashed while the older kids stayed up watching The Return of the King and younger folk watched the much shorter Lord of the Beans. A fitting, restful ending to a truly fun and memorable day.

#1 Kids' birthday parties ought to include cake and ice cream, but that's not to say you can't also introduce a little bit of culture into the festivities.
#2 Never underestimate the potential of papier-mâché: from piñatas to fearsome creatures to fiery mountains, newsprint and glue can be a great friend.
Posted by Christie at 10:00 PM

What a great party--and what attention to details! I love the way that "Shelob" seems to be hanging in a web, for instance--that was a nice touch on somebody's part. The Ringwraith has a very ghostly look--nicely done. Good use of authentic LOTR music with the videos!

Yes, Christie, good job with the soundtrack. I especially like the quaint Hobbit music at the beginning of the Shelob clip, but when Aragorn(?) defeats the spider, the music is appropriately more dramatic.

as a tolkien fanatic myself I'm so glad to see young kids who love this book also. I was worried that Harry Potter would outshine a true literary masterpiece that Tolkien's books are. For some it has, but to your kids, who obviously have good parents, it hasn't. What great ingenuity. When they get older...out of nightmare age...take them on a good two weeks LoTR hiking trip through a good wooded river area...and have real black riders scare the @#$% out of them in the middle of the night ;) The state of Nebraska, believe it or not, is an awesome landscape for any LoTR venture. It is by no means a flat state, and the vast green rolling hills look just like the shire, the Niobrara, although shallow in some years, a great Anduin, perfect with Emyn Muil landscaping on both sides. Toadstool park makes for great downs, and there's enough horse country to make any Rohan fan proud. Fort Robinson and Chadron State Park make for great hikes through amazing woods. If you called a Cherry county or even talked to the local ranchers and told them what you wanted to do...they'd LOVE to make your adventure marvelous. I'd be surprised if they didn't. Nebraskans love to show people their state, and the older ranchers are GREAT with kids or anyone who shows interest in the beauty of the land up there. And it is beautiful. Just type in "Nebraska sandhills" in google photos, or "Niobrara." It's beautiful.

I guess I should also say that this lodge makes a wonderful Prancing Pony...THESE people you could start with. No, I don't work for them or own the lodge.

This is near the caves of SD which are AWESOME, and is where the beautiful woods are, etc. OK, I'll stop commenting now, but ran across your LoTR mania party ;) and wanted to tell you I'm a LoTR fan too and Nebraska is where I feel like I'm actually in Middle Earth. No kidding. You could email me if you want more photos etc. What I think is kinda odd in fact is if you look at a map of nebraska there's a central river that runs through it that reaches the Missouri River, which is a golden brown muddy river that borders the state...which, ironically, is what Brandywine river means: Sindarin for "golden brown river," and Westron for "border river." The Platte river splits up and goes North just like it does in The Shire, and Nebraska has these lush rolling green hills, it looks like Ireland. Makes me wonder sometimes if Tolkien didn't look at a map of Nebraska when he mapped out the Shire. Anyway...here's the link: http://www.stateparks.com/fort_robinson.html